Two For The Price Of One (Montana Cowboys #3) 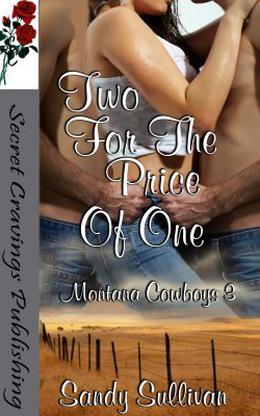 Emma Weston, tomboy and small town Montana girl from hole in the wall Red Rock. Nothin' ever happens here except tumbleweeds catching on Rancher Adam's fence and shortin' out the electrical so the cattle escape, new wildflowers painting the prairie with a burst of color or an occasional rodeo accident to liven things up. So what the hell is country music's hottest singer's bus doin' embedded in the front end of her beat up old pickup? And why in the hell is she seein' double?

Beau Tucker is tired and cranky. Keepin' his wild ass brother in line, drivin' the tour bus, bookin' shows and tendin' to the money flow is gettin' old, but he promised he'd be there no matter what. Well he just ran into what when he runs a stop sign in the middle of Montana and cave's in the front end of a pickup belonging to one of the prettiest women he's ever seen. But will she see him for anything besides Brandon Tucker's brother?

Little Miss Emma has one problem. She's hot for both the Tucker brothers. Brandon has been her wet dream for the last five years and now that she knows he has an identical twin, she's havin' all kinds of fantasies of being sandwiched between the two. What happens when the bus rolls out of Red Rock onto the next stop?
more
Amazon Other stores
Bookmark  Rate:

'Two For The Price Of One' is tagged as:

Similar books to 'Two For The Price Of One'

More books like 'Two For The Price Of One'   ❯

All books by Sandy Sullivan  ❯

Buy 'Two For The Price Of One' from the following stores: