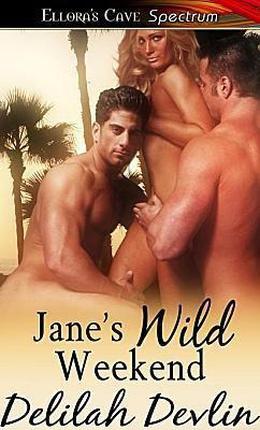 Jane's Wild Weekend Delilah Devlin Jane wants Bruno...Bruno wants Cord...Cord wants Jane...but can everyone get what they really want? Jane, fresh from a breakup, decides to seduce Bruno, one of the firemen next door, to restore her shattered confidence. But the trap she sets is sprung instead by his best friend, Cord. After she flees in embarrassment, Bruno makes a proposition too wicked for any good girl to consider, but how can she refuse the chance at not one, but two strapping firemen? Bruno has shared women with Cord before, but decides to use Cord's attraction to Jane to break down his defenses for the ultimate threesome. Cord thinks he knows how this little tryst will go down, but he's seduced into allowing Bruno intimacies this hetero guy has never before considered.
more
Amazon Other stores
Bookmark  Rate:

'Jane's Wild Weekend' is tagged as: