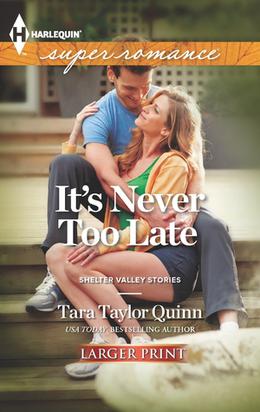 In the shelter of this town… Mark Heber accepts a mysterious scholarship to a prominent college in Shelter Valley, Arizona. Being a mature student is a big change from his hardscrabble life in the mountains of West Virginia, one that could transform his whole future.

For attorney Adrianna Keller, Shelter Valley is the scene of a childhood tragedy and she returns for one reason only—her loyalty to college president Will Parsons. Somebody's blackmailing him. Adrianna agrees to investigate discreetly, posing as a student named Adele Kennedy.

"Adele" and newcomer Mark become neighbors and develop a friendship that quickly becomes something more. In fact, Adrianna begins to envision a life with him. But maybe it's too late. Because her secret—and the shocking discovery she makes—could destroy Mark's future. And her own….
more
Amazon Other stores
Bookmark  Rate:

'It's Never Too Late' is tagged as:

Similar books to 'It's Never Too Late'

Buy 'It's Never Too Late' from the following stores: