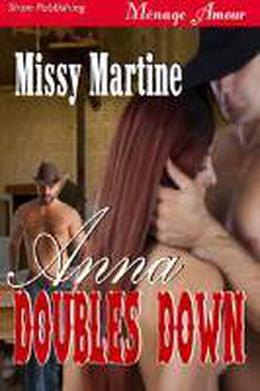 Anna can’t believe how much the woman in the picture looks like her. They could be twins, except the picture was taken in 1871. Either she’s a relative, or Anna had a past life in Hamilton, Nevada. Either way, the temptation to visit the old ghost town is too much. She and her friend Kat travel west.

While off exploring on her own, Anna is knocked unconscious when she falls down the steps in the saloon. She can hardly believe her eyes when she wakes.

Beau and Zeke won the Silver Rush Saloon in a poker game and have been partners and secret lovers for over ten years. They don’t know what to make of the woman they found half-dressed in their cellar. She claims to know something terrible that’s about to happen to their town and needs their help.

Will Anna be able to win their love and trust before it’s too late?

'Anna Doubles Down' is tagged as:

Similar books to 'Anna Doubles Down'

All books by Missy Martine  ❯

Buy 'Anna Doubles Down' from the following stores: