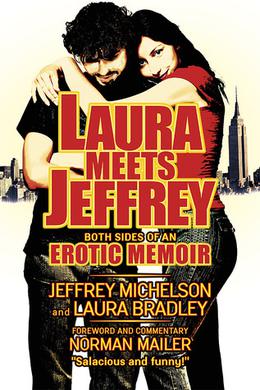 LAURA MEETS JEFFREY while she’s working in an upscale New York City brothel in 1980 and they share an apocalyptic moment. It’s love at first orgasm. And so begins their double lives in a real life version of Fifty Shades Of Grey.

At dinner parties she’s known as a witty lingerie model and jewelry artisan, and a famous film director’s ex-lover. He’s her media wizard boyfriend, a designer discovered by John Lennon who worked for John & Yoko, Apple Records and the Rolling Stones, and then created Puritan, the world’s largest-selling explicit sex magazine. On weekends he boxes with Ryan O’Neal and Jose Torres.

The late Norman Mailer wrote the Foreword to LAURA MEETS JEFFREY and considered his famous interview with Jeffrey and Laura on “Ethics and Pornography,” excerpted as a bonus chapter in this book, one of the best of the more than 600 he gave in his lifetime. Besides bequeathing the Foreword, Mailer gave guidance to this account of two lovers, who missed none of the wild era just before the door slammed shut on sexual freedom and aren’t afraid to reveal all of it.