Irresistible (Something in Common #4) 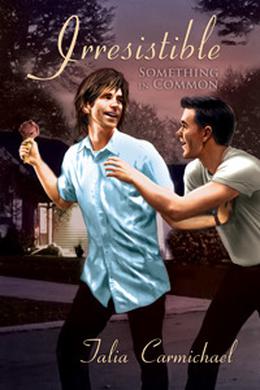 Del Jenkins prefers to be alone—or so he tells himself until his younger brothers try to make him a playdate with bookstore owner Harper Hillman. Del’s brothers just want him to make a new friend, but there is no way he can be friends with Harper. Not unless Harper’s definition of “friends” includes jumping into bed together and getting naked and sweaty. When Harper turns him down flat because he doesn’t sleep with strangers, Del shrugs it off and suggests they get to know each other better. He already sees something wonderful in Harper, and he won’t give up so easily.

Harper is still mourning his dead husband, and a casual sexual encounter with Del is the last thing he wants. But getting to know each other—platonically, of course—should be harmless. In no way is Harper getting close to another man. But as he and Del spend more time together, Harper realizes it’s too late—he’s already involved. His heart is set on Del, and Harper is powerless to resist.
more
Amazon Other stores
Bookmark  Rate:

'Irresistible' is tagged as:

The 'Something in Common' series

Buy 'Irresistible' from the following stores: