Someone Perfect For Mr. Moore 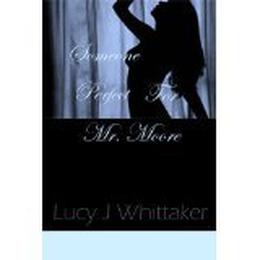 Lucy watched as his face closed and became expressionless, she felt a shiver run through her when she saw the cold look on his face. He took her arm in a firm grip and led her to her door.
“You should go to bed; the hallways get drafty at night.” He frowned as he looked down and saw her pink toe nails peeking out from under the hem of her robe. “Why are you barefoot?”
Lucy slowly closed her mouth, boy he was bossy. She could feel the strength in his touch, as she looked up at him she noticed her head didn’t even reach his shoulders. He let her go and continued to look down at her, and she felt her mind go blank. Did he just ask her something? He stood so close and she became hyper-aware of him. He reached out and touched her cheek with the backs of his fingers. She gasped and stepped back against the door with wide eyes. She slowly reached up to touch the spot he had touched and met his eyes. She felt her breathing quicken as she got caught in his gaze. Minutes went by and neither spoke. She finally remembered where she was and who she was talking to, she felt a blush rush into her cheeks.
more
Amazon Other stores
Bookmark  Rate:

'Someone Perfect For Mr. Moore' is tagged as:

Similar books to 'Someone Perfect For Mr. Moore'

More books like 'Someone Perfect For Mr. Moore'   ❯

Buy 'Someone Perfect For Mr. Moore' from the following stores: