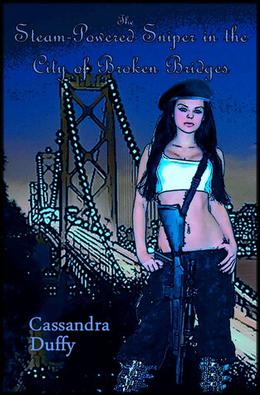 Claudia Marceau, sniper extraordinaire and notorious flirt, has grown bored with Tombstone and the Lazy Ravens as a whole. With her unrequited crush on the gunfighter Fiona Bishop growing ever more impossible after the inclusion of Gieo into the mix, she has found temporary comfort in the arms of the White Queen Veronica. But what she really wants is out—out of Tombstone, out of the Ravens, out of the range of the romance she can’t have. On the tumultuous last night, with Tombstone burning down around her, she makes her escape into the desert night to seek out the father she is certain still lives and the freedom she craves.

Her years of experience as a scout and survivor serve her well on a tremendous journey through the post apocalyptic wasteland where she takes counsel from a scorched Owl, slays a rising caste of Slark, and survives an encounter with an army of mutants that forever changes her and the fortunes of humanity.

When she arrives in the City of Broken Bridges that arose from the ashes of San Francisco, she finds her father not only lives, but has become a powerful warlord charged with protecting the most technologically advanced city in human history.

The maudlin French Canadian heroine becomes embroiled in a love tangle with a British sailor, a Scottish footballer, and the world’s last donut shop girl. In a landscape filled with man-eating trees, giant god-like robots, and vile mutants, Claudia strives to find a moment’s peace before the Lazy Ravens make their push to the west coast and claim a city with more secrets than people.
more
Amazon Other stores
Bookmark  Rate:

'The Steam-Powered Sniper in the City of Broken Bridges' is tagged as:

The 'The Raven Ladies' series

All books by Cassandra Duffy  ❯

Buy 'The Steam-Powered Sniper in the City of Broken Bridges' from the following stores: