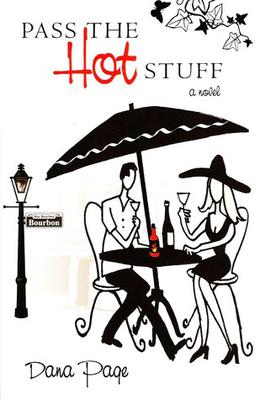 The safe guy or the sexy guy?
The answer is always ... Pass the Hot Stuff

Blythe Townsend is a belle who is in desperate need of having her chimes rung. But the man she is dating would have to get his head out of his briefs - his legal briefs - long enough to notice.

She is a frustrated romantic obsessed with Turner Classic Movies. She lives in the French Quarter with her dog, Lady Marmalade, and is determined not to go sour on love even though she has dated every nutcase along the Mississippi Delta. Now, she is trying her best to make it work with her deadly dull boyfriend.

Blythe accepts him - boring business dinners and all. There's always steak, but never any sizzle. There's only so much a libido can take; and when she repeatedly spots a man around town she christens Tall, Dark and Eye Candy, she starts to feel what she's been missing.

So, what's stopping her from tasting something a little ... sweeter? She refuses to be hurt again, and this sexy New Orleans guy has all of the trappings to do just that. Blythe will have to find her inner big-shouldered broad to deal with the craziness in her life; and she has a group of hilarious, mouthy women helping her sort through the crazy.

Their story is a sultry dance to Delta blues and soulful jazz that drifts the reader into the romance of New Orleans. So, sit down at the kitchen table and pour yourself a drink - we're gonna pass the hot stuff.
more
Amazon Other stores
Bookmark  Rate:

'Pass the Hot Stuff' is tagged as:

Buy 'Pass the Hot Stuff' from the following stores: