The Dragon and the George (Dragon Knight #1) 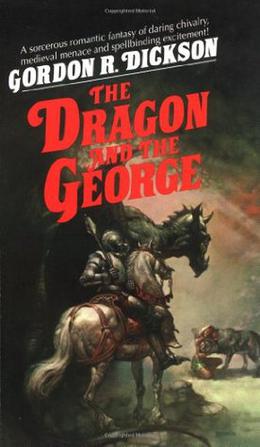 Jim Eckert was a dragon. He hadn't planned it that way, but that's what happened when he set out to rescue his betrothed. Following her through an erratic astral-projection machine, Jim suddenly found himself in a cockeyed world - locked in the body of a talking dragon named Gorbash.
That wouldn't have been so bad if his beloved Angie were also a dragon. But in this magical land, that was not the case. Angie had somehow remained a very female human - or a george, as the dragons called any human. And Jim, no matter what anyone called him, was a dragon.
To make matters worse, Angie had been taken prisoner by an evil dragon and was held captive in the impenetrable Loathly Tower. So in this land where georges were edible and beasts were magical - where spells worked and logic didn't - Jim Eckert had a problem.
And he needed help, by george!
more
Amazon Other stores
Bookmark  Rate:

'The Dragon and the George' is tagged as:

Similar books to 'The Dragon and the George'

More books like 'The Dragon and the George'   ❯

Buy 'The Dragon and the George' from the following stores: