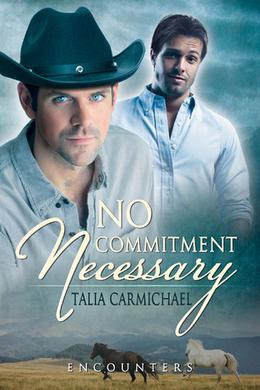 To commit or not to commit—it’s not even a question for laid-back cowboy Nate Bailey. Since he doesn’t do relationships and values his peace of mind, his initial reaction to the temptation of his coworker, Kevin Matthews, is a clear no. Then Kevin counteroffers "no-strings sex" and the game changes. Or does it?

Kevin Matthews wants to build a new life. Masterson Ranch is a great place for it, and the handsome cowboy who showed him the ropes when he started working on the ranch is just the man he's looking for. The problem is Nate’s fear of commitment. Hoping to entice him, Kevin offers a casual arrangement—but soon Kevin has to admit to himself that he wants all of Nate, not just his body.
more
Amazon Other stores
Bookmark  Rate:

'No Commitment Necessary' is tagged as:

Similar books to 'No Commitment Necessary'

Buy 'No Commitment Necessary' from the following stores: