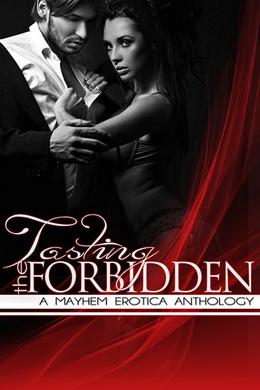 Our goal at Mayhem Erotica is to provide readers with the best in sensual storytelling by merging dynamic and well-developed characters. With intriguing plots and tantalizing love scenes, our writers will deliver readers to new depths of debauchery by arousing and stimulating the senses.

We present our Forbidden Anthology - 5 steamy tales of Forbidden Lust that will not disappoint.

Obsession by K.I. Lynn - Laurel’s admiration for her boss, Shane, has gone overboard into a dangerous place; love. She’s watched and wanted him for over three years, time and women passing through his life, including his short lived second marriage. Playful office antics created out of frustration, set in motion the blurring of lines between assistant and her employer. Does it stop there, or will Shane be able to show Laurel she’s not the only one with an obsession?

House Calls - Kit Neuhaus - A lonely housewife, bored and sick of her dismissive husband decides that a broken sink is just the opportunity she needs to bring some excitement--and sex into her life.

Altered - Evelyn R. Baldwin - I’m going to hell anyway, so why not.
⇇
Every day she comes and kneels in the first pew. I can’t help but wonder where else she’s on her knees, or who else she’s on her kneels in front of. It’s the same vicious cycle, though. I think impure thoughts, castigate myself in my office or confessional chamber, then count the minutes until she returns again the next day so I can repeat the cycle.Today is no different. She’s in the front pew, hands folded, resting against her forehead as she prays for forgiveness. I wonder what she’s done that she needs to come here and pay penance each day. Is she a bad girl? Does she have naughty thoughts? I can’t help the impure thoughts from creeping in. It wouldn’t matter how much I castigate myself. When it comes to her, there’s no use in trying to be a man of God.

Indecent - L.J. Anderson - M/M His notes consumed me, invaded every waking thought with the unsettling feeling of being watched by someone--someone so observant that all my hidden desires were laid bare, leaving me naked and vulnerable to my mysterious stranger’s watchful eyes.
I was unnerved, at a disadvantage, out of control.
And I had no one to turn to.

The Politics of Sex - M/M Spencer Cade has been groomed to be a politician since he was in diapers. Born and bred in Texas, he comes from a long line of powerful men. The Cade family has been involved in politics since the Goldwater era, and Spencer is their last great hope to make it all the way to the White House. As a State Senator, he’s made quite a name for himself. Young and charismatic, Spencer is ready for the next step, to become a US Senator. Spencer has it all: the right family name, the right background, education, the perfect wife—he’s on track to make it all the way to the top. Everything is going to plan until George Walsh shows up at his election headquarters as the new campaign manager.
Working for Spencer Cade is a dream come true for George Walsh. While he’ll never set the world on fire, George knows politics. Shrewd and reserved, with a sharp mind and even sharper tongue when the situation calls for it, George has no problem doing whatever needs to be done to ensure that Spencer makes it to Washington. With his black framed glasses, quirky bow ties, and argyle sweater vests with matching socks, he rocks Spencer’s outwardly straight life to its very core. Their attraction to each other is instantaneous, intense, and the one thing that can bring Spencer Cade’s carefully managed life to the ground in a spectacular, fiery explosion of politics, love, and sex.
more
Amazon Other stores
Bookmark  Rate:

'Tasting the Forbidden: A Mayhem Erotica Anthology' is tagged as:

Similar books to 'Tasting the Forbidden: A Mayhem Erotica Anthology'

Buy 'Tasting the Forbidden: A Mayhem Erotica Anthology' from the following stores: