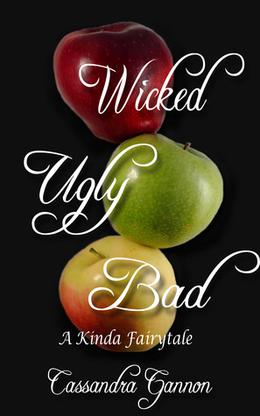 Once Upon a Time…

Scarlett Riding is NOT an ugly stepsister. Cinderella is the evil one in the family and Letty is determined to prove it. Unfortunately, that’s kinda hard to do from behind bars. After the debacle at the ball, Letty and her sister Dru were dragged off to the Wicked, Ugly and Bad Mental Health Treatment Center and Maximum Security Prison. While Cindy’s planning her dream wedding, her two stepsisters are being forced to endure life in the dreariest dungeon in the land.

Luckily, Letty has a plan to change that unhappy ending. If she can just get to Prince Charming and prove the glass slipper doesn’t fit Cinderella’s foot, she can reclaim her life. In order to do that, though, she needs to convince The Big Bad Wolf to lend a hand in organizing a jailbreak.

Marrok Wolf isn’t sure what to make of the idealistic redhead in his group therapy sessions. With fifty counts of Badness on his criminal record, Marrok’s used to being surrounded by crooks and scumbags. Scarlett wants to lecture him about equal rights for trolls! When the little do-gooder comes up with an elaborate plan to break their entire “share circle” out of prison, though, Marrok is certainly willing to go along with the plot. And not just because he wants to see her naked. The woman may not be wicked, ugly, or Bad, but she’s definitely the only one who can save him.

Together with a wicked witch, a timid bridge ogre, an evil prince, and other villains straight out of a storybook, Scarlett and Marrok are about to make sure that Baddies finally have a happily ever after.
more
Amazon Other stores
Bookmark  Rate:

'Wicked Ugly Bad' is tagged as: