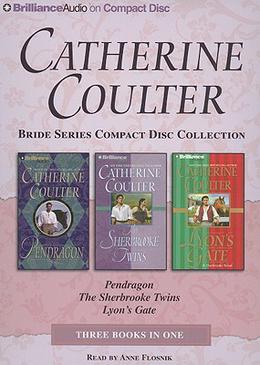 Pendragon: Tysen Sherbrooke now has four sons and Meggie, age nineteen. Her almost-cousin Jeremy Stanton-Greville unknowingly breaks her guileless heart. She rallies with a hasty marriage to Thomas Malcombe, despite a very nasty rumor involving a local girl. Thomas takes his bride to Pendragon, a castle on the southeastern coast of Ireland. Filled with very eccentric folk, Pendragon nonetheless charms Meggie, until she discovers that she's there for a reason that could lead to disaster. The Sherbrooke Twins: The Sherbrooke family saga continues with James and Jason Sherbrooke. James, twenty-eight minutes older than his brother, is the heir. He no longer sows excessive wild oats, as his neighbor, Corrie Tybourne Barrett, a brat he's known since she was three-years-old, looks forward to doing since she turned eighteen. Then, unfortunately, the earl, Douglas Sherbrooke, is shot at. Adventures compound; Corrie hurls herself into the thick of things. Lyon's Gate: Five years after Jason Sherbrooke leaves England for Baltimore and the Wyndhams, one of the premiere racing families in the area, he wakes up early one morning with Horace's ugly pug face staring him down, and knows it's time for him to go home. When his twin James takes him to Lyon's Gate, a once-renowned racing stud farm near his family's home, Jason knows to his soul that this property is what he wants more than anything. Unfortunately, Hallie Carrick wants Lyon's Gate just as badly as Jason.
more
Amazon Other stores
Bookmark  Rate:

'Pendragon / The Sherbrooke Twins / Lyon's Gate' is tagged as: