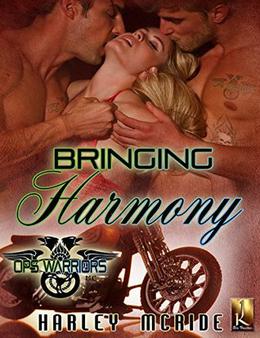 Warning: For Mature Adult Audiences. Contains language and actions some may deem offensive. Extreme violence. Ménage – MFM.
In book two of the Ops Warriors MC: Harmony finds herself being pulled back into the last place she promised herself she would never go again. When she left two years ago, she had been broken by the only family she had ever known. Building a life for herself, moving on, doing exactly what they wanted her to do—leave.
Creed and Fork run the Warriors, and when problems arise with the Diablos, everyone is called back in. Even the ones who don't want their protection or don't need it. Including the little hellcat who walked away from them for no good reason. Even with trouble surrounding them, they are not men to let an opportunity get away from them—again. What they don't expect is the resistance they receive—and why would they, they have always gotten what they want—until now, and at least not without a fight of wills.
What happens when a drug lord is moving in on territories that belong to not one but two MC clubs? Join in and find out as the Warriors and Savages unite to show them.
more
Amazon Other stores
Bookmark  Rate:

All books by Harley McRide  ❯