The Bird of the River (Lord Ermenwyr #3) 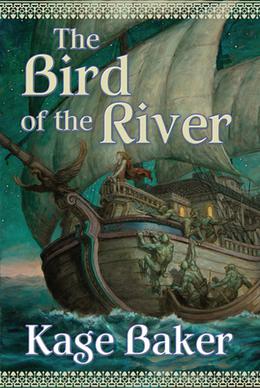 In this new story set in the world of The Anvil of the World and The House of the Stag , two teenagers join the crew of a huge river barge after their addict mother is drowned. The girl and her half-breed younger brother try to make the barge their new home. As the great boat proceeds up the long river, we see a panorama of cities and cultures, and begin to perceive patterns in the pirate attacks that happen so frequently in the river cities. Eliss, the girl, becomes a sharp-eyed spotter of obstacles in the river for the barge, and more than that, one who perceives deeply.

A young boy her age, Krelan, trained as a professional assassin, has come aboard, seeking the head of a dead nobleman, so that there might be a proper burial. But the head proves as elusive as the real explanation behind the looting of cities, so he needs Eliss’s help. And then there is the massive Captain of the barge, who can perform supernatural tricks, but prefers to stay in his cabin and drink.
more
Amazon Other stores
Bookmark  Rate:

'The Bird of the River' is tagged as:

Similar books to 'The Bird of the River'

More books like 'The Bird of the River'   ❯

All books by Kage Baker  ❯

Buy 'The Bird of the River' from the following stores: