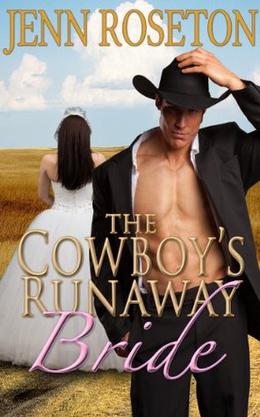 What happens when a runaway bride meets a wealthy cowboy?

Realizing her wedding is a sham, curvy Maddie Stanton takes to her kitten heels and escapes the ceremony - still dressed in her bridal gown!

Stranded on the Wyoming highway with a flat tire, rescue appears in the form of Garrett Trask. When the handsome cowboy hires her to work on his ranch, Maddie jumps at the offer, grateful to leave her past behind her.

She never counted on falling in love …

But when she discovers a secret from Garrett’s past, her newfound happiness is shattered. Can this sexy cowboy convince Maddie he loves her, and her curves? Or will she forever remain the runaway bride?

This is a sexy contemporary romance novella of approximately 27,000 words.

Half an hour later, they rode back to the barn. “You don’t want to overdo it for your first time.” Garrett dismounted easily and tethered the horses to the post, then came to help her down. “Take your right foot out of the stirrup, swing your leg over, then place your right foot on the ground.”

She tried to obey his instructions, kicking her right foot out of the stirrup before swinging it backward. Clenching the horn with a death-grip, she hovered in the air, her left foot still in the stirrup and her right hand grasping the back of the saddle. She didn’t think she could do it. Wobbling slightly, she sighed in relief when Garrett’s strong arms wrapped around her waist.

“I’ve got you,” he murmured, his warm breath brushing her neck. A shiver raced down her spine. He helped her off Prince, untangling her left foot from the stirrup. She turned to him, a little dizzy.

“Thank you.” She looked into his dark brown eyes, wanting to melt into their depths. Despite her best intentions, she was definitely attracted to this man. But what did he feel about her?

“You’re welcome.” He gently smoothed her hair back from her face. “You might want to take a bath tonight, since you’re not used to horse riding.”

She gave the briefest of nods. Her eyes remained locked on his. She didn’t want to do anything to break the sensual spell.

Garrett’s hand touched the small of her back, his thumb caressing her spine, urging her to take a couple of steps closer to him. She obeyed willingly, her heart thudding with anticipation.

He gazed down at her, threading his fingers through her hair. She held her breath as his lips descended, until they were only a heartbeat away from hers. “Maddie,” he murmured.

She waited for the touch of his lips …
more
Amazon Other stores
Bookmark  Rate:

'The Cowboy's Runaway Bride' is tagged as:

All books by Jenn Roseton  ❯

Buy 'The Cowboy's Runaway Bride' from the following stores: