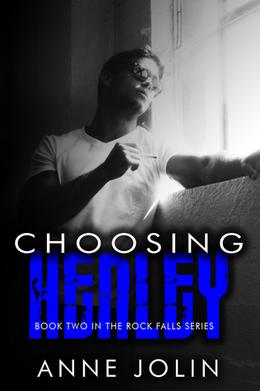 Lennon Montgomery is scared. Absolutely scared shitless of love.
When the floor fell out from underneath her perfect childhood, it shattered her ability to trust. The one man in her life who was genetically programmed to love her left her. Since then, she’s allowed men into her bed and even into her life, but never into her heart.

Jamison Henley has never wanted a woman for longer than it takes him to make a guitar. He’s content living his life and loving only three things: making guitars, cooking great food, and Martha, his black pit bull. He never chases women, and he’s never had to.

One night together changes everything. There’s no going back to the way it was before.

She doesn’t want to want him, but she does.

He knows he wants her, but he can’t have her.

Will Montgomery take the leap of faith in choosing Henley? Or will her fear cripple their chance at a happily ever after?
more
Amazon Other stores
Bookmark  Rate:

'Choosing Henley' is tagged as:

All books by Anne Jolin  ❯