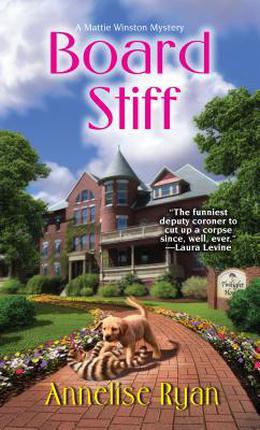 Sorenson, Wisconsin's deputy coroner Mattie Winston is back on the job - in a nursing home examining the body of Bernie Chase, the now former president of the Twilight Home's board of directors, who is covered in a poweder used to turn liquids to solids. The home's residents are certain Bernie was offing the patients who cost him too much, and the patient that found him can't remember a thing. Between her ongoing tug of war with Detective Hurley, fulfilling her job a requirement of seeing a shrink, and wrangling with the Twilight Home's board of directors, Mattie's got her scrubbed hands full. She'll need all of her outside-the-box forensic skills to crack a case that's turning out to be stranger - and more dangerous - than anything she's seen before!
more
Amazon Other stores
Bookmark  Rate:

'Board Stiff' is tagged as:

Similar books to 'Board Stiff'

All books by Annelise Ryan  ❯

Buy 'Board Stiff' from the following stores: