Things We Knew Were True 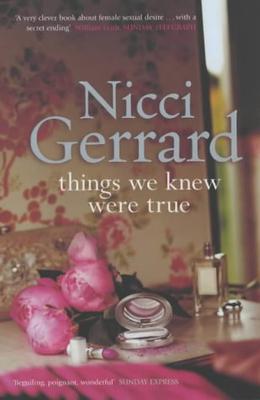 Nicci Gerrard is one half of Nicci French, the highly successful pseudonymous crime novelist created with her husband journalist Sean French. But anyone expecting the tensely wrought psychological thrills of the Nicci French books in Things We Knew Were True , this first novel written under her own name, will be in for something of a surprise. This is a poignant and expressively written narrative of a sensitive schoolgirl, Edie, ill-at-ease with herself, who loses her virginity to a boy from a local council estate and is embarrassed when her father discovers the couple in a compromising state. Later, her father Vic loses his job and endures periods of black depression before committing suicide. Edie finds that she is forced to grow up very quickly, and puts her teenage romance in the past. Decades pass, and Edie's mother dies, bringing back painfully unresolved situations.

This utterly absorbing novel has an acute and perceptive grasp of the tensions of family life, and Nicci Gerrard has a genuine skill in conjuring up the agonies of adolescence. The real achievement of Things We Knew Were True is the handling of the abrupt, enforced changes that take place in Edie's personality and the shadow cast over her life by the death of her father; this is a theme explored with both power and sympathy. While the intensity and danger of the Nicci French books is not to be found here, there is much of the subtle and intelligent observation of human character found in the books of William Trevor, and it's clear that Nicci Gerard has all the possibilities of enjoying separate success as a novelist along with her crime writing achievements with her husband. --Barry Forshaw

'Things We Knew Were True' is tagged as:

Similar books to 'Things We Knew Were True'

More books like 'Things We Knew Were True'   ❯

Buy 'Things We Knew Were True' from the following stores: