The Pepper in the Gumbo (Cane River Romance #1) 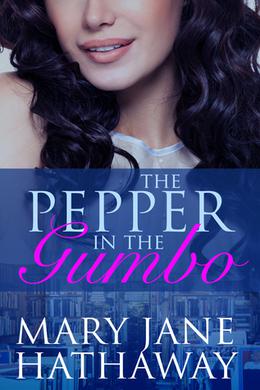 "Alice Augustine runs the oldest bookstore in the historic district of Natchitoches and believes technology is the root of most problems. If only more people would turn off the Tv and shut down the computer, the world wouldn't be in the mess it's in. If only she can get the teens she loves to step away from the screens, they might be able to hold on to their Creole culture. The only person who seems to understand her passion for classic literature is the mysterious website owner, Browning Wordsworth Keats.
Paul Olivier comes back to his home town determined to show the people of Cane River that he's not the poor, nerdy kid he once was. He's made a fortune designing video games and opening a giant electronics store right in the snooty historic district will be the crowning glory of his career. Unfortunately, one bookish anti-tech fanatic has decided to do everything she can to keep that from happening. Even worse, she doesn't know that in cyber space, they're best friends and kindred spirits.
Alice and Paul clash from the start, but nothing is ever quite as it seems. When secrets are revealed, will there be a second chance- for both of them?
A romance that brings the humor of You've Got Mail and the deep friendships of 84, Charring Cross Road, this romance will touch the classic literature lover in everyone."
more
Amazon Other stores
Bookmark  Rate:

'The Pepper in the Gumbo' is tagged as:

Similar books to 'The Pepper in the Gumbo'

More books like 'The Pepper in the Gumbo'   ❯

Buy 'The Pepper in the Gumbo' from the following stores: