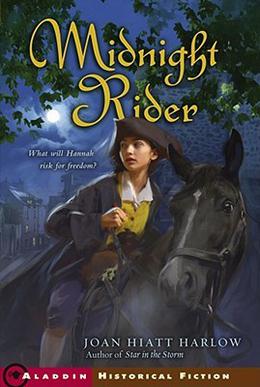 Fourteen-year-old Hannah is an orphan living with her cruel aunt Phoebe in Salem, Massachusetts. Hannah recently lost her mother, and now her only comfort is her horse, Promise. But when her money-hungry aunt sells the horse and then indentures Hannah to the Boston family of a British general, Hannah vows to retrieve Promise at all costs, and join the fight for freedom.

In Boston, as disagreements between the Whigs and the Tories run high and Americans prepare for revolution, not only does Hannah begin secret meetings with the Sons of Liberty disguised as a boy, but she is also reunited with Promise. Together with her beloved horse, Hannah takes a bold step to join the fight for freedom and sets off on a dangerous mission. Will she and Promise succeed?
more
Amazon Other stores
Bookmark  Rate:

'Midnight Rider' is tagged as: