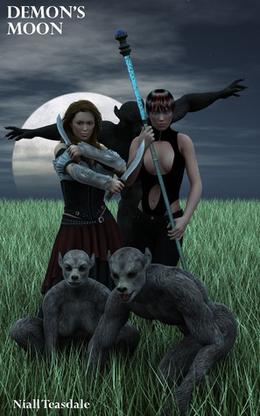 A PhD thesis on the metaphysical change process of were-creatures, what could possibly go wrong with that? Ceridwyn Brent, thaumatologist and sorceress, figured it was just a matter of getting a few friends together, putting them in the middle of a scanning thaumometer rig, collating the results, and writing it all up. No muss, no fuss. She even has one of the rare South American were-creatures to work with, and exciting new insight into the process to write up. Her doctorate is a shoe-in and her personal life with Lily, her half-succubus “pet” has never been better.

But something is going on among the werewolves. Dane, leader of the North Hills pack, believes that an old menace is returning to Britain. Alexandra, the enigmatic Alpha of the Battersea pack believes that Ceri is the only person who can stop that menace from doing something which will threaten mankind as well as the wolf packs. When werewolves across the country suddenly go to war with each other, Ceri and Lily have to go to war themselves to save their new friends, and Ceri must find “The Fair One” before the Winter Solstice. For then, beneath the Demon’s Moon, the fate of all werewolves will be decided.
more
Amazon Other stores
Bookmark  Rate:

'Demon's Moon' is tagged as:

All books by Niall Teasdale  ❯