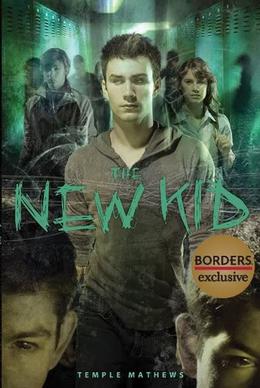 Will Hunter is used to being the New Kid; Harrisburg High School is his fifth new school in less than three years. By now, he knows not to be fooled by the bright pep rallies, the wholesome jocks, the innocent cheerleaders. He knows the evil lurking underneath. It’s the same evil that took his dad eight years ago: the same evil he battles every day.

Natalie Holand’s life fell apart the night her sister Emily disappeared. No one believes her when she tells them what she saw: yellow and green eyes, glowing beneath the surface of the water in which Emily supposedly drowned. And Emily isn’t the only person to go missing in Harrisburg lately. The town is changing, not for the better, and Natalie doesn’t know why. What she does know is that, whatever’s happening, it’s bad, and the New Kid is right in the middle of it.

Because Will has a secret even bigger than Harrisburg’s, and there’s more to it than even he knows.

This fast-paced, action-packed first novel by veteran Hollywood screenwriter Temple Mathews takes the idea of high school as hell to a whole new level. Will’s story, part wish-fulfillment sci-fi adventure and part iconic hero’s journey with a side of budding romance, will appeal to teen readers of both genders.
more
Amazon Other stores
Bookmark  Rate:

'The New Kid' is tagged as:

Similar books to 'The New Kid'

All books by Temple Mathews  ❯

Buy 'The New Kid' from the following stores: