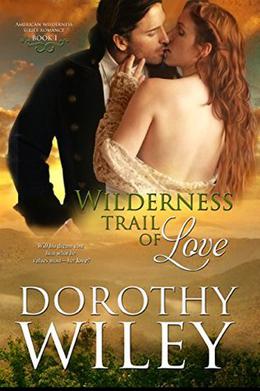 Will Stephen’s dream cost him what he values most—Jane’s love.

Award-winning historical romance author Dorothy Wiley's WILDERNESS TRAIL OF LOVE is the first American Wilderness Series Romance. This memorable novel breaches the walls of time, bringing readers to a young America, where romance and danger are as powerful as the wilderness.

Set in 1797, on America's romantic frontier, this gripping journey of danger, heartache, and passion is the story of Stephen Wyllie, and his heroic and breathtaking quest for land-across a thousand perilous miles to the Kentucky wilderness-a new world for the brave. Stephen wants only one thing more than land-to keep his wife Jane and their young daughters safe. But he needs land to make a better future for his family, and the frontier lies open to settlement in the new state of Kentucky. He must make a difficult decision-choose between the comfort and safety of their New Hampshire home and his dream for their future. Can he risk exposing them to the dangers of the wilderness? Then an immediate threat makes the decision clear. A vicious half-Indian killer, Bomazeen, begins to haunt the area, stealing slaves for the Algonquians to replace those lost to smallpox. Having glimpsed her great beauty from afar, the cunning slave trader tantalizes the tribe's virulent Chief, Wanalancet, describing his next target-Jane.

Believing the merciless slave trader may soon succeed in kidnapping or murdering Jane, Stephen decides his family must leave for Kentucky with his four brothers. When the harsh demands of the frontier nearly tear apart their great love, Stephen and Jane must find a path through more than the wilderness. His courage is undaunted, her passion is deep, but the wilderness is full of terror. Two lives. One great love. Torn apart by a frightening wilderness.

'Wilderness Trail of Love' is tagged as:

All books by Dorothy Wiley  ❯

Buy 'Wilderness Trail of Love' from the following stores: