Trent is a Slut 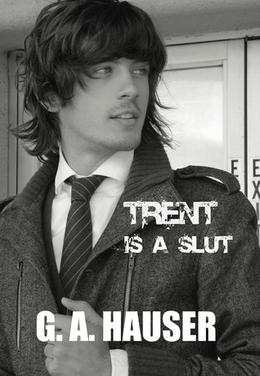 Thirty-two year old, Trent Hill hated to admit he enjoyed shallow hookups, but, he did. Being handsome, rich; from a large inheritance, and apathetic to his family and friends, Trent simply had no interest in messy strings which attached people to him. But lately, he was gaining a reputation as a ‘slut’ simply because he did not reciprocate the acts of sex men desired from him.
Parry Brampton was a computer geek and worked for himself building websites. Having reached twenty-eight years of age, Parry was not out, insecure about his looks, and…a virgin.
Even his best friend, a straight buddy from college, has no idea Parry is gay.
But Parry’s loneliness draws him to West Hollywood, and while at restaurants and clubs, Parry sees a handsome man several times, and then learns through the gossip surrounding him, that the man’s name is Trent Hill. And…he’s a ‘slut’.
Parry desires Trent’s attention, but every time Trent sees Parry, he looks right through him, as if he wasn’t there.
Weary of being invisible, Parry sets up a fake profile on a social network, and pretends to be a model, ‘friending’ Trent and starting a dialogue with him, catfishing him.
And Trent takes the bait.
But when Trent’s pressure to meet-up with this made-up individual becomes too much, Parry faces the consequences of his fraudulent deed.
The virgin and the slut.
Was there a way these two men were ever going to see eye to eye?
Parry was willing to do anything it took to get to know this handsome man, and maybe the geek had what it took to change Trent Hill…and attach those dreaded strings
more
Amazon Other stores
Bookmark Rate Book

Similar books to 'Trent is a Slut'

Buy 'Trent is a Slut' from the following stores: