A Rumor Of Bones (Lindsay Chamberlain #1) 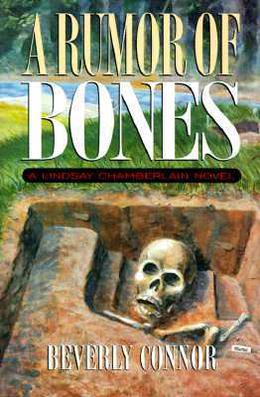 Lindsay Chamberlain has a problem. People keep finding bodies in shallow graves and bringing the bones to her. It's not that she doesn't know what to do with the remains. An anthropologist who specializes in archaeology, she is an expert in the forensic analysis of bones.

It's the bones of missing children, however, that disturb her, and lately she's had more than her share of them. Someone has been abducting young girls in the area for several years, and their remains have recently been found in shallow graves in a nearby wooded area. And Lindsay is asked to identify them.

A lot of strange things have happened since Lindsay and her colleagues from the Anthropology Department at the University of Georgia first began excavating the Indian settlement at Jasper Creek. First came the grave robbers and pot hunters, then the mysterious opposition that jeopardizes their work. After the shady lawyer who has orchestrated some of the trouble is murdered and someone attempts to abduct a nine-year-old girl, Lindsay finds herself in the middle of a crime that took place sixty years earlier. Because so much time has passed, it looks as if the murderer will get away with the crime. Can Lindsay provide the proof needed to bring the killer to justice?

'A Rumor Of Bones' is tagged as:

Similar books to 'A Rumor Of Bones'

All books by Beverly Connor  ❯

Buy 'A Rumor Of Bones' from the following stores: