The Rake And The Recluse : REDUX 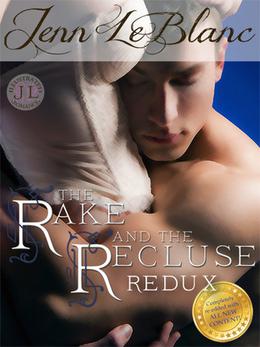 A woman out of time.
A man stifled by propriety.
A nemesis determined to take her away.
A brother to the rescue.

How will a powerful Duke deal with a woman who doesn't know her place? How will a woman used to the 21st century survive in time where she is considered property?

THE RAKE AND THE RECLUSE Part One brings Francine to the world of the Duke of Roxleigh, clashing worlds in first installment of the completely revised novel, with all new material.

Part two finds Francine in the world of the Duke of Roxleigh. The clashing of worlds in first installment of the completely revised novel continues as Francine finds her footing, discovers secrets about her elusive host, and learns more about herself than she ever thought possible.

Part THREE brings Francine and Gideon closer than they ever imagined possible, until the unimaginable tears them apart. What will Gideon do if he loses her, this time, forever? This is the third installment of the completely revised novel, with all new material.

Each additional part will be added to the book as it is released. YOU WILL NEED TO DELETE THE BOOK FROM YOUR READER AND RE-DOWNLOAD IT FROM THE WEBSITE you purchased it from for it to update with each part.

This is also available as a serial novel independently.

Francine Larrabee woke up on the wrong side of the century. She was fairly certain she went to sleep in her own comfy bed, but she doesn’t quite seem to be there now. Only adding to her problems is that she has no voice, is constantly being glowered at by a large, stunning man who is obsessed with propriety, and she is apparently betrothed to another horrid little man, determined to ruin her, and any other girls that get in his way.
How does she find herself in the past, when she couldn’t even find herself in her present? How does a self sufficient businesswoman survive in a time when women were still considered property for the whole of their lives and what is she going to do with this man who draws her to him so fiercely.
more
Amazon Other stores
Bookmark  Rate:

'The Rake And The Recluse : REDUX' is tagged as:

Similar books to 'The Rake And The Recluse : REDUX'

More books like 'The Rake And The Recluse : REDUX'   ❯

All books by Jenn LeBlanc  ❯

Buy 'The Rake And The Recluse : REDUX' from the following stores: