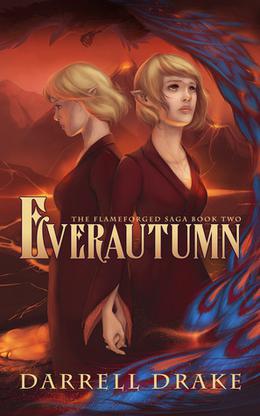 Undeath meant only that they could wait forever.

Everautumn is a realm beyond common reality and common knowledge. Where retching volcanoes, unrelenting heat and ashen forests canopied with tufts of flame dominate scarcely hospitable terrain. A realm in the midst of conflict spanning millennia.

Almi and Merill have died. Their hearts no longer beat in the fashion they once did. Extirpated and deposited in the harsh, lava-sown world of Everautumn, they now survive as something seated between elf and undead. For six years they have endured, because they trust he will come.

Accompanied by Descarta, the artificial weaveress; Elissa, the once-forgotten daughter; and Hafstagg, the paunchy warrior, Virgil has been sailing in search of a way to keep his promise to revive the elven twins. And he will stop at nothing to do so.

Everautumn plans to challenge that.

The second entry in a sometimes-flippant, sometimes-grim sword & sorcery series that challenges morality and the boundaries of love. Follow a cast of eccentric, complex characters—from elves with severe personality disorders to a caretaker of time and space—as they brave worlds and leave lasting changes in their wake.
more
Amazon Other stores
Bookmark  Rate:

The 'The Flameforged Saga' series

All books by Darrell Drake  ❯

Buy 'Everautumn' from the following stores: