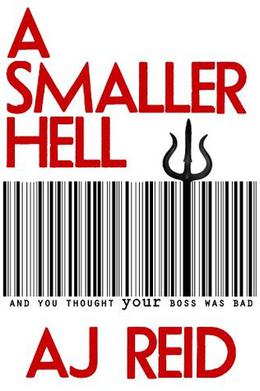 Tony Black is a lonely thirtysomething, lost in the grey wasteland of modern Britain. His lust for life gone, he sleepwalks to and from work each day, barely even able to conjur a daydream on the journey.

Dianne Doyle is an insatiable fortysomething in a playground of corruption, with each game becoming increasingly bizarre. Some would say that she is simply a businesswoman trying to make a success out of her inheritance, but those who know her best know that her interest in profit margins ran out a long time ago. Her pampered, flawless appearance belies a dark history of perversion and violence ... and the worst is yet to come for Tony Black: Tanner's Department Store's newest employee, and Dianne Doyle's chosen playmate for her most enigmatic and dangerous game yet. This Christmas, the mundane will be a warm, distant memory for Black, as he finds himself pinned down by Doyle's trident of blackmail, sex and violence.

A Smaller Hell is a tale of collisions between the normal and the perverted; the workaday and the surreal; the logical and the absurd; and of course, good and evil. It will keep you guessing as Black negotiates his way through the darkest corners of this once-splendid shipbuilding town, guided by strange characters and the distant voice of his own morality, right up until the shocking climax at the Christmas party.
more
Amazon Other stores
Bookmark  Rate:

'A Smaller Hell' is tagged as:

Similar books to 'A Smaller Hell'

Buy 'A Smaller Hell' from the following stores: