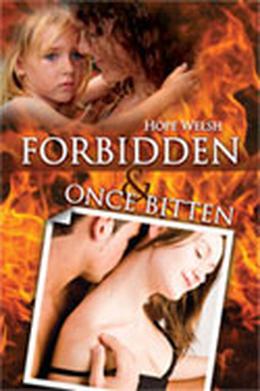 Sarah was disfigured by a fire while saving the life of a child, while the vampire, Devlin, watched helplessly. Through dreams, he has spent months coming to her, loving and making love to her. Finally, he comes to her in the night and tells her he can give her back her beauty--by making her a vampire--even though it's forbidden.

In "Once Bitten", Hailey has just broken up with "The Jerk" and is
finding her way again as a newly single woman.  While out with a friend
in a bar, she wants to just go curl up with an episode of Stargate.
Instead of the cab she'd thought to take home, she's offered a ride by a
gorgeous man--and doesn't refuse when he tells her he's a cop with the
local police department.  What could be safer?  Bennett has wanted her
for years--since they were high school together.  Now, ONCE BITTEN, he
knows he wants her forever--but will the Vampire Hunters allow them
their happiness, or will the danger drive them apart?
more
Amazon Other stores
Bookmark  Rate:

'Forbidden & Once Bitten' is tagged as:

Similar books to 'Forbidden & Once Bitten'

Buy 'Forbidden & Once Bitten' from the following stores: