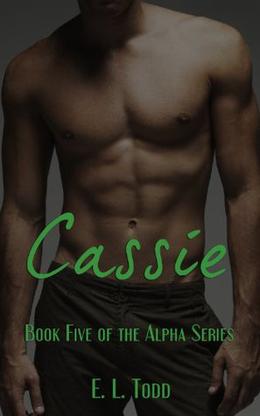 **This full-length novel is the fifth in a series about the alpha males, this one being Tony, but it has a happily ever after for him and Cassie, the object of his obsession. Don’t worry kids, there’s no cliffhanger, so read on and enjoy!**

CASSIE, THE FIFTH BOOK OF THE ALPHA SERIES

Working as a fashion designer, Cassie has everything she needs. But after her last boyfriend cheated on her, she’s given up on love. After having another horrible date where the guy discusses his obsession with bowling balls, she runs into Tony at a bar, only to discover he’s her best friend’s brother. Chemistry is ignited and desire follows directly afterwards. But she needs to tell her best friend the truth. Only Tony is hesitant to reveal their secret. Cassie notices his obvious wealth and connections, and she wonders if that has anything to do with his secrecy.

When Tony meets Cassie, he’s immediately smitten. After dealing with girls that have only wanted him for his money, he’s relieved to find someone that is nothing like that. But his innocent feelings become deeper and stronger. His love and adoration for her grows until the point of obsession. When Cassie loses her job at her magazine, he immediately takes care of her, wanting to solve all her problems. But Cassie is resistant. She’ll do whatever she can to prove her loyalty to him. But Tony isn’t having it. And when his sister disapproves of their relationship, it changes nothing. He’ll stop at nothing to keep her forever. Even if she doesn’t agree.

'Cassie' is tagged as:

Buy 'Cassie' from the following stores: