Culmination (Chronicles of the Fallen #4) 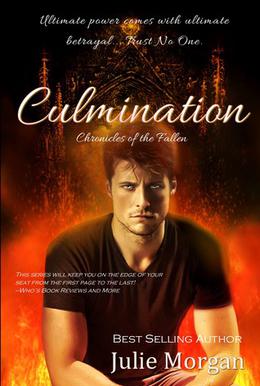 Ultimate power comes with ultimate betrayal. Trust No One.

War is coming and sides must be chosen. Jonathan has grown into his powers and he’s stronger than he could ever begin to
understand. Having abilities from both worlds makes him one of the most powerful beings on earth. Even Elysium has no
control over him.

Hell has risen and with it, the coming apocalypse. Their sights are set on Jonathan, the Nephilim’s and the traitors against Hell. Michael warned the light will not be involved… until war or death are inevitable.

Taking matters into his own hands, Jonathan builds an army and in the process, meets an unlikely ally. She’s sexy as hell and
knowledgeable about all things demon. He also knows her from somewhere but can’t figure out who she is.

Secrets are unfolding and his world begins closing in around him. Will Jonathan be strong enough to face the truth or will he lose himself and submit to the darkness?
more
Amazon Other stores
Bookmark  Rate:

'Culmination' is tagged as:

The 'Chronicles of the Fallen' series

Buy 'Culmination' from the following stores: