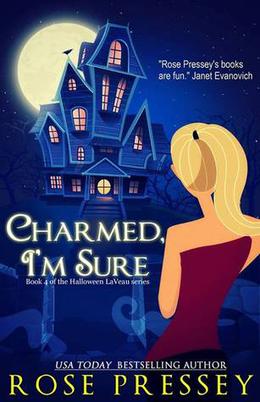 Hold on to your broom, Halloween is back!

Halloween LaVeau never intended on being the leader of the Underworld. Now the job is all hers. But that doesn’t mean other witches aren’t trying every trick in the book to take that title away from Hallie.

The Underworld Board has sent investigator Charlie Scott to look into all the mishaps Hallie has encountered since becoming the leader. Almost immediately upon Charlie’s arrival, strange things start happening at LaVeau Manor.

Hallie has a little help handling the odd occurrences. The sexy half-brothers Nicolas Marcos and Liam Rankin are there to help Hallie navigate the ins and outs of the Underworld. Since the brothers are witches and vampires this could be to Hallie’s advantage.

When Hallie’s long lost uncle appears and the investigator disappears, Hallie must work a lot of magic to make things right again, or stand losing her new status as leader of the Underworld.
more
Amazon Other stores
Bookmark  Rate:

'Charmed I'm sure' is tagged as:

Similar books to 'Charmed I'm sure'

Buy 'Charmed I'm sure' from the following stores: