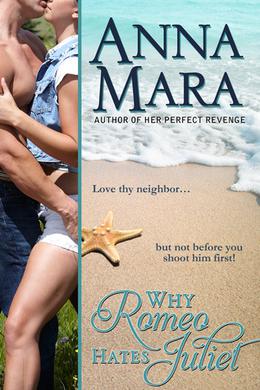 Love thy neighbor... but not before you shoot him first!

From the first moment they meet, when has-been movie star, Romeo Boyd mistakes romance writer, Juliet Soma for the hot stripper his friends have hired for him for the night, the beach neighbors clash and an epic war of pranks begins to brew between them.

And when the sexy novelist gets the partying, Hollywood bad boy arrested by mistake, things spiral further downhill from there.

Furious, Juliet paced the room. "Did you hear what that low-life said about me?" she shouted.

Sara nodded. "I'm so sorry, Juliet. You were right about everything."

"I know! And now, there's only one thing left for me to do."

"Take the next plane out of here?"

"No! I'm going to superglue two of his body parts together."

Sara's mouth hung open in shock at her sister. "Juliet!"

One day, a prank goes too far and Juliet accidentally shoots the movie star. When Romeo comes to, to Juliet’s horror, he has amnesia and believes that she is his wife.

But does he really?

No, of course not! He’s just faking it to get his revenge and make her his slave.

But how far is Romeo prepared to go, especially when he finds himself falling, head-over-heels, in love with the annoying, infuriating but achingly gorgeous enemy next door?

And how far will Juliet take things when she discovers how the electrifyingly handsome bum has been playing her all along? Will she finally admit that she's completely in love with him too?

But most of all, she liked - no loved - how he loved her, his wife. His love for her was always there, like a third person in the room. You could feel it, anyone could. It was palatable, a living, breathing emotion that colored everything everywhere. Only - she wasn’t really his wife, was she? He just believed that because of his amnesia. Their fairytale love was just a sand castle and everyone knew what happened to sand castles. They eventually got stomped on.

WHY ROMEO HATES JULIET is a romantic comedy, emotional rollercoaster ride filled with twists & turns and highs & lows, spanning an entire summer at the beach.

NOTE: This is NOT a modern-day version of "Romeo & Juliet".

'Why Romeo Hates Juliet' is tagged as:

Buy 'Why Romeo Hates Juliet' from the following stores: