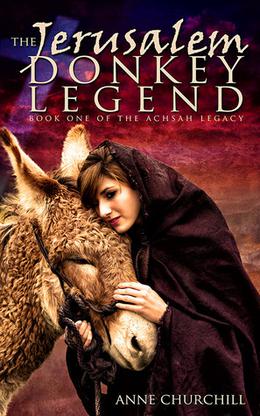 The Jerusalem Donkey Legend tells us that the donkey that carried Jesus into Jerusalem on Palm Sunday also followed him to Calvary, for the donkey loved the Lord. Appalled by the sight of Jesus on the cross, the donkey turned away but could not leave. The shadow of the cross fell upon his shoulders and back, forever marking him and all of his descendants. Amidst a horse farm in Tennessee and the equestrian sport of Three-Day Eventing, arise jealousy and hate, love and forgiveness and a little pink burro marked with the cross. Paige Winston and her teenage twins, Jacob and Jaden, thrive in the equestrian world. Paige is consumed with bitterness and rage, her Christian faith shattered when her husband, Robert, was shot and killed by a stranded motorist. On a whim, she adopts a wild burro--and her life is transformed forever. Hannah Butler was ten when her mother's car was run off a dark road in Derbyshire, England by two motorcyclists. Hannah survived the horrific accident; her mother was killed. Seven years later, living in Jackson, Tennessee, a beautiful 17-year-old Hannah, classmate and best friend to Jaden Winston, realizes that her feelings for Jaden's twin brother, Jacob, have grown beyond friendship. When spring turns into summer, Hannah's sacred, Biblical ancestry finds her--putting her and the Winston twins on a collision course with a man of Goliath evil who knows about the Achsah Legacy.
more
Amazon Other stores
Bookmark  Rate:

'The Jerusalem Donkey Legend' is tagged as:

All books by Anne Churchill  ❯

Buy 'The Jerusalem Donkey Legend' from the following stores: