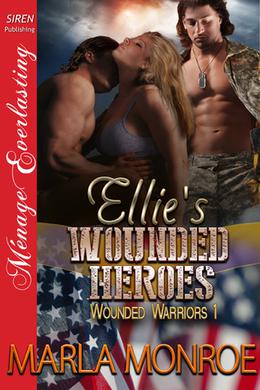 Ellie Carpenter is attracted to Rex Fielder from the beginning, and then Clark Givens is added to the picture. Ellie knows she is in over her head. She cares deeply for both men. She’s afraid it will cause problems between them.

When the men get involved with a family in crisis, they asked Ellie to help since she is a social worker. But things get out of hand and Clark is nearly killed saving her life. Rex feels that his amputation means he can’t take care of Ellie like he wants to. He decides that having two men to care for her would work and convinces Clark to give a shared relationship a try. After all, Clark thinks he’s too emotionally damaged to ever be able to get married.

Both men have lingering issues from their time in the service, since being medically discharged, but that isn’t the problem for Ellie. She doesn’t want to have choose between them. Does she have to?
more
Amazon Other stores
Bookmark  Rate:

'Ellie's Wounded Heroes' is tagged as: