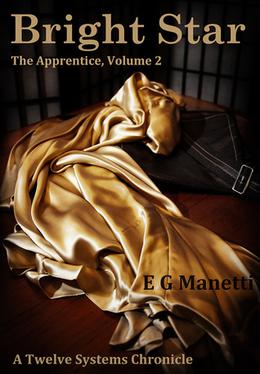 A woman in trouble. A powerful man with a hidden agenda. A society where honor is revered and trust is a dangerous indulgence.

To avoid execution for her father’s crimes, Lilian embraced her one chance at survival and became the apprentice of the powerful warrior Lucius Mercio. In return for Lucius’ protection, Lilian yielded total control of her body, intellect, and will. When Lucius’ motivations and ambitions are revealed, they are far more extraordinary than Lilian imagined.

In the second volume of The Twelve Systems Chronicles, Lilian’s enemies are more determined than ever to see her destroyed. A ghost from her past will imperil her future and threaten to destroy Lucius’ slowly developing trust. Lucius’ rivals increase in number and ferocity as they seek to limit his expanding wealth and power. They will use any means to undermine and destroy his plans including his notorious apprentice.
more
Amazon Other stores
Bookmark  Rate:

'The Apprentice, Volume 2: Bright Star' is tagged as:

The 'The Twelve Systems Chronicles' series

All books by E.G. Manetti  ❯

Buy 'The Apprentice, Volume 2: Bright Star' from the following stores: