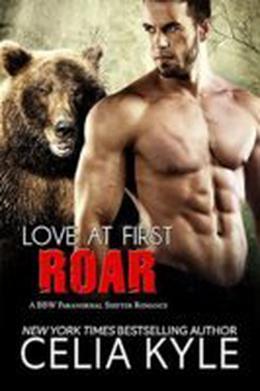 What happens when a half-blind weremole girl falls for a scarred werebear guy? A match made in furry, dirt-caked heaven. Mostly.

Weremole Kira Kolanowski has spent twenty-nine-ish years of her life half-blind and occasionally half-dead. (Her family isn’t exactly loving.) In an effort to remain fully alive, she moves to Grayslake, Georgia, with her poor excuse for a guide dog—a guide dog who decides to lift his leg and relieve himself on sexy-smelling werebear Isaac Abrams’ belongings. And when he roars…well, it makes her heart go pitter-patter and other parts go “ooh baby, ooh baby.” Just when she thinks she might have found happiness, a raving she-bitch werebear chick tries to kill her with the same poison that scarred Isaac to hell and back. The poison that Kira’s family happens to manufacture…

Isaac Abrams is leaving Grayslake. He’s tried, lord how he’s tried, to settle into life in Grayslake after the birth of his niece, but it’s not happening. He’s been home for a year, and it’s been 365 plus days of women looking past him and flat-out pretending he doesn’t exist. The battle with the hyenas didn’t just ruin his face, it ruined his chances at finding a mate in his hometown. So, he’s leaving. Or he was leaving until one day a lush, curvaceous weremole wanders into his half-packed house with that damned peeing dog of hers…it’s a good thing she’s so gorgeous.

Maybe he will stay—stay and keep Kira Kolanowski all to himself. Well, once he kills everyone who’s trying to kill her.
more
Amazon Other stores
Bookmark  Rate:

'Love at First Roar' is tagged as:

Buy 'Love at First Roar' from the following stores: