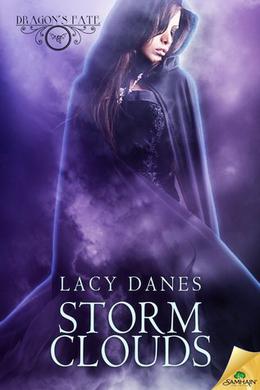 Before there can be fire, there must be air…

Like his brothers, Ilmir is a dragon born by blood magic. Unlike them, he has an unrelenting thirst for human blood. His one and only scruple: he will never bite a woman he loves. It would kill her, and her loss would drive him mad.

Yet over the years, a young girl he once rescued and brought to the Isle has grown into a woman who occupies too much of his mind and heart.

On her name day, Astrid makes her two most heartfelt wishes: to experience the delights of the city, and to bring the vexing Ilmir back to the Zir family fold. As her wishes drop from her lips, lightning cracks and she discovers she is a weather witch—one in need of serious training to control her powers.

But her goal to redeem Ilmir is fraught with peril, for her deep need to learn the magical language not only awakens the dragon’s passion, it creates a perfect storm of danger that could cost the life of the man she loves.

Warning: This novel contains explicit sex, weather witches, vampires, a super-hot air dragon, and a woman who can wrap him up in a spell.
more
Amazon Other stores
Bookmark  Rate:

'Storm Clouds' is tagged as: