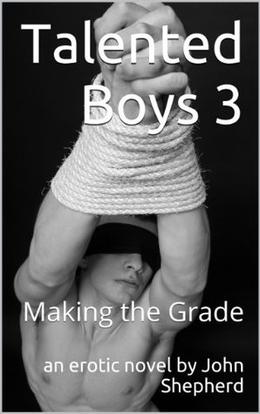 Who hasn’t been hot for an innocent college boy? Kevin’s first semester of his freshman year ended in disaster: he lost his scholarship and was kicked out of school. But can he use his talents as a model – and in the bedroom – to turn his life around?

Other works by John Shepherd:

Kevin is an eager young college freshman in his first semester away from home. Exposed to the wild and hot gay scene, he loses his virginity one sultry night to a seductive older man. Before long, a parade of men turn Kevin’s adorable little body into a wild sex machine. But Kevin discovers that true love is harder to find than wild sex. And it’s hard to keep your grades up with all those men keeping your pants down!

Kevin’s first semester of college didn’t go as planned. He’d become a wild little gay slut, and his grades had suffered. But his loving boyfriend had a plan to get Kevin’s life back on track. But could Kevin resist the allure of hot sex and refocus on his studies?

'Making the Grade' is tagged as:

Similar books to 'Making the Grade'

All books by John Shepherd  ❯

Buy 'Making the Grade' from the following stores: