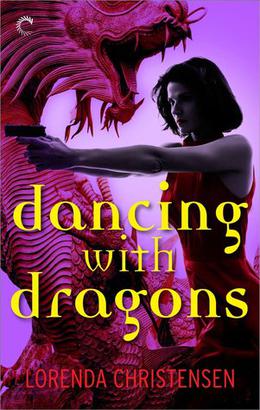 If Carol Jenski knows anything, it's fashion—and it's not in fashion to consort with dragons, even though they've coexisted with humans since World War III. Still, she would never have agreed to take part in a plot against them. Now a dragon lord has called for her head, her boyfriend is MIA and she's been abandoned in a foreign country.

Only reporter Daniel Wallent is on Carol's side…sort of. He offers his assistance if she helps him investigate his latest story. He'll need Carol's language skills to infiltrate an organization run by one of the most dangerous and secretive dragons in the world.

Escaping one sociopathic dragon's claws only to walk into another's is an insane risk—and so is falling for Daniel. Posing as his blushing—and very affectionate—new bride as cover soon leads to an all-too-real attraction. But fighting off dragons and her desire for Daniel may be more of a challenge than Carol can handle….
more
Amazon Other stores
Bookmark  Rate:

'Dancing with Dragons' is tagged as:

The 'Never Deal with Dragons' series

Similar books to 'Dancing with Dragons'

All books by Lorenda Christensen  ❯

Buy 'Dancing with Dragons' from the following stores: