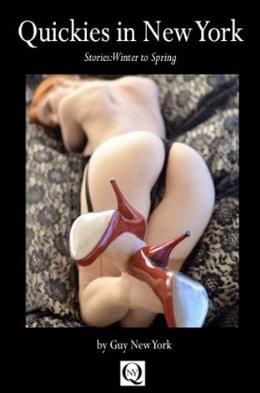 Moving between polyamory and buddhism, and from bondage to first love, the stories move from the cold snows of a New York winter to the final blossoming of Spring. Sometimes explicit, and sometimes heartbreaking, Winter to Spring is the story of real sex between real people (often two or three at a time).

Reviews of the blog Quickies In New York:
"If Henry Miller were alive today (and had a visual sense as acute as his intellect) he'd be doing something like this. What I particularly love is that this is erotica that appeals to my mind and spirit as much as my blood and balls. In both words and images, Quickies in New York finds eroticism everywhere from street-level vulgar to penthouse sublime. It doesn't shy away from the chaos and emptiness that sometimes comes on the heels of ecstasy. The work is classy, gorgeous, and thoughtful."
--Christopher Ryan, New York Times Bestselling Author of Sex at Dawn


"New York keeps its name for the sexiest city in the world, and it's shown with something as simple as this photographic diary about a guy in the city who reflects on eroticism, nudity, sensuality, and sex."
--Playboy Espanol (playboy.es)
Voted #1 out of the top 100 sex blogs on Betweenmysheets.com
Featured on Filthy/Gorgeous Things
Featured on Fleshbot
Recorded for and published on SonicErotica.com
more
Amazon Other stores
Bookmark  Rate:

'Quickies in New York: Stories, Winter To Spring' is tagged as:

Buy 'Quickies in New York: Stories, Winter To Spring' from the following stores: