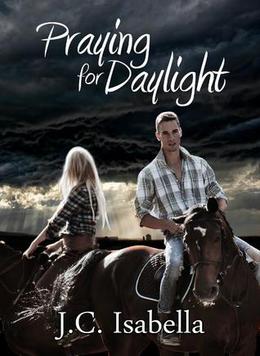 Kate Kelly gave up everything to be a star. Her life was on the fast track as country music’s hot newcomer, but that meant leaving her hometown of McCree Montana and the boy she loved behind.

Dustin O’Brian didn’t think he’d ever see Kate again. After leaving him with a gaping hole in his heart, he figured being in the same room with her, much less the same state, would take a miracle.

When he finds Kate hiding out in the old Kelly house, he realizes something went wrong. Dustin wasn’t sure what those Hollywood folks had done to send her running, but he was beyond happy she’d sought him out for company…once he convinced her that he’d keep her being back in McCree secret.

Things were looking up, and he had high hopes that Kate would be his once more.

That is until Death comes knocking at her door.

And Dustin realizes that the future he wants with Kate is one they will have to fight for.
more
Amazon Other stores
Bookmark  Rate:

'Praying For Daylight' is tagged as:

Similar books to 'Praying For Daylight'

All books by J.C. Isabella  ❯

Buy 'Praying For Daylight' from the following stores: