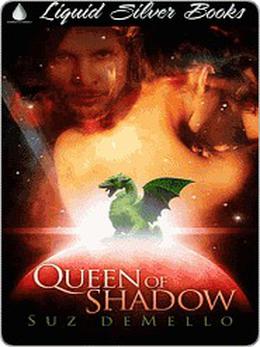 Janus is a planet which lacks both tilt and spin, and its Shadowlands are the pewter band of dusk dividing the violently hot Lightside of the planet from its Darkside, imprisoned by eternal night. Due to moderate temperatures, the Shadowlands are the most livable portion of Janus, the most heavily populated and wealthiest. Because of the peculiar conformation of the planet, birthrates are low and indiscriminate sex is encouraged for everyone except the unmated Queen of Shadow, themost powerful person on Janus. She cannot fully indulge her lust; should she become pregnant, her baby's father would become King of Shadow. Audryn, Queen of Shadow, has reached that time in her life when she must choose a King to rule with her or fail to bear an heir, casting not only her realm but all of Janus into chaos. Despite her duty, she is reluctant to share power, even a bit distrustful. Certain Shadowland nobles vie for Audryn's hand, and rival factions of DarkDwellers fight among themselves for the right to send candidates. The more organized Children of Light send their Prince-Scientist to woo Audryn. Although she enjoys trysting with all her suitors, none seize her heart. Then Storne, the warrior Prince of Darkness, arrives to claim her as his bride. Will his masterful ways allure or repel the willful Queen?
more
Amazon Other stores
Bookmark  Rate:

'Queen of Shadow' is tagged as:

Similar books to 'Queen of Shadow'

Buy 'Queen of Shadow' from the following stores: