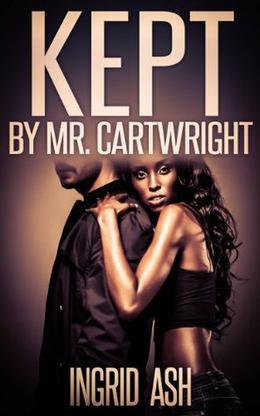 “There’s no such thing as fairy tales. Not for people like us.”

Tamara Pierce is a kept woman. No longer forced to sleep on the streets, she now lives in the penthouse of the fanciest apartment building in NYC, has a driver, and a closet full of couture, not to mention a sexy white billionaire who can't get enough of her. But at what price? As she tests the limits of their unconventional relationship, Tamara learns that Mr. Cartwright has a dark side and an even darker sexual appetite. Her Cinderella story might not be all that it seems…

*** AN EXCERPT ***
After a long day of job searching, I couldn't be happier to come home and throw my shoes off. Nothing feels better than having an actual home of my own to come back to.

I rip my shirt over my head as soon I enter my bed room, and then come to a full stop when I see him.

Now this I wasn't expecting.

I haven't seen Mr. Cartwright in two weeks since our initial... encounter. He's been out of the country on business since then, and wasn't supposed to be back until the end of the month. And it's been torture thinking about him every night.

But I quickly realize that he doesn't look happy.

“I...didn't expect you back for two more days,” I stammer when I see him.
His face is cold and stoic, his jaw clenched. I've waited not so patiently for him to return and I've planned out in my head, multiple times, what I plan to do to him. And what I want him to do to me.

But now that he's actually here I have no idea what to do.

“Close the door, Tamara,” he says.

With a click, I shut it behind me and my hand stays wrapped tightly around the knob.

He doesn't move for a moment, just watches me intensely, the way he always does. His legs are apart and his hands are rested on his knees.
“I've heard you've been looking for a job,” he states.

That's what this is about? “Yeah? I have. That's what I just got back from doing.”

“And that is strictly against our agreement.”

I cock an eyebrow at him. “Since when?”

“Since now. So you are to cease your job search. Understood?”

“Um, no I honestly don't. What the hell is wrong with me looking for a job?”

“Do not question me.”

This all seems random, controlling and frankly, ridiculous. “What the--”

“Tamara,” he says in his stern tone and I fall silent. “You've lied to me.”

“I didn't lie, I just didn't get a chance to tell you yet. I didn't think it was that important.”

“No, I'm not just talking about the job. You've lied to me about everything. Veronica ran a background check.”

But of course she did.

“Be quiet,” he commands. “You will explain. I'll get the truth out of you. But you'll have to be...punished.”

'Kept By Mr. Cartwright' is tagged as:

Buy 'Kept By Mr. Cartwright' from the following stores: