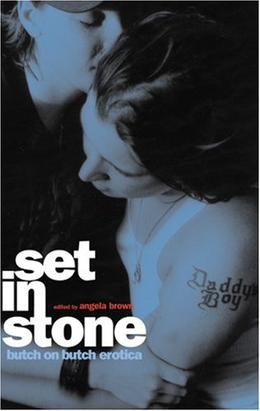 In this brilliantly original anthology, 20 of the most celebrated erotica writers of recent years take us on a bumpy, naughty, no-holds-barred trip with the most elusive of lesbian creatures: butch women who know how to get one another's motors revving. A wry and sexy anthology that drives hard and fast but guarantees a thrilling ride.

Angela Brown is a Los Angeles-based writer, editor, and cartoonist, whose interest in butch women was sparked early on by her marathon viewing of the Aussie television show Prisoner: Cell Block H as well as Pam Grier's numerous women-in-chains flicks.

'Set in Stone: Butch-On-Butch Erotica' is tagged as:

Buy 'Set in Stone: Butch-On-Butch Erotica' from the following stores: