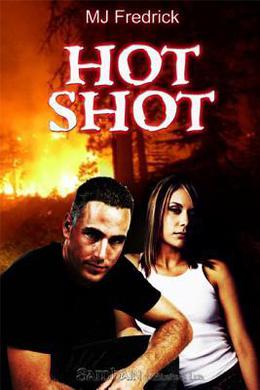 Their passion rivals the fires they battle.

Peyton Michaels expected her assignment to be simple--write an article about everyday heroes. Heroes like Hot Shot firefighter Gabe Cooper. She never expected to find herself running up a mountain, a wildfire nipping at her heels, her life in his hands.

And she never expected to be drawn to Gabe. After the loss of her husband in the line of duty, the last thing she wants is to fall in love with yet another man who routinely puts his life at risk.

Gabe has had enough of women who want to make him into someone he's not. Women like his ex, who couldn't handle the heat of his job. Like Peyton, who sees him as a hero when he's just a man doing a job. Except time after time, the pesky reporter proves her mettle. And gets deeper under his skin.

But there's an arsonist at work, and danger is closing in with the speed of a raging brush fire. Peyton and Gabe have to dig deep for what it takes to be a real hero--to find the courage to reach out and grab a forever kind of love. Before it's too late.
more
Amazon Other stores
Bookmark  Rate:

'Hot Shot (Samhain)' is tagged as: