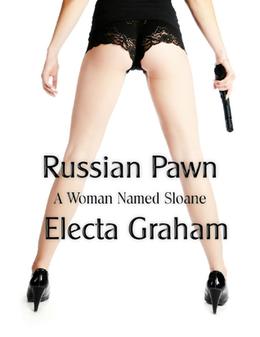 Sloane is a sexy professional thief who has been hired by some of the richest and most powerful men in the world. She helps them complete collections they legally can't own. Precious artifacts, royal jewels and any other treasure that may be hard to obtain. Its just a game to them, but it has made her some very powerful enemies.

The most powerful of them all is her estranged husband and head of the Russian mob. Sergei isn't used to being stolen from or rejected. Sloane has done both. Will she be able to escape his clutches? Will the man he hired to capture her let her go or turn her over?
It seems bleak, but Sloane can be very persuasive and she will use any trick of the trade to get away. (pun totally intended)
If you like an erotic story that will not only turn you on, but also has characters that will entertain you as well, then Russian Pawn is for you.
It gets intense, dirty and rough and Sloane gives as good as she gets.

This story is meant only for people over the age of 18 the themes and content are very mature.
more
Amazon Other stores
Bookmark  Rate:

'Russian Pawn (A Woman Named Sloane)' is tagged as:

All books by Electa Graham  ❯