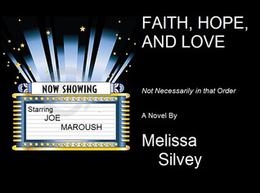 Did you ever wonder what it would be like to be a normal girl in love with the hottest new actor in America? Faith is, but their marriage is estranged, and she has no idea where he is other than he's in LA. When she finally finds him the paparazzi has already found her, and she's fodder for the tabloids. She doesn't belong in his world, she thinks, and decides to end the marriage. But will her heart let her do it? Even after she found out he's cheated on her the entire time they were apart? Read Faith, Hope, and Love to find out.
more
Amazon Other stores
Bookmark  Rate:

'Faith, Hope, and Love' is tagged as:

All books by Melissa Silvey  ❯

Buy 'Faith, Hope, and Love' from the following stores: